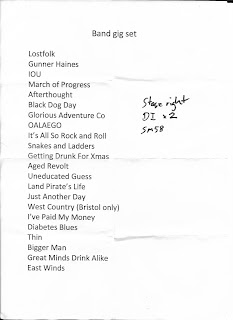 The 4th of 4 in 7 hectic gig days, this; following this one, I can wind down and reflect on a quite stellar 51-gig 2019. So it seems only fitting that my host/s for my final scheduled gig of this year are Gaz Brookfield And The Company Of Thieves, Gaz in 2019 becoming my most-seen “live” act and further extending his leading tally to 25 with a trio of autumn gigs, this being the final one. And well anticipated too; as soon as I heard Gaz’ best-yet new album “Lostfolk”, I realised I had to hear this excellent, superbly catchy and (dare I say it) mature material being given the full band treatment, so I passed on the clashing “12 Bands Of Christmas” event at the Vic in favour of this, Gaz’ traditional big Christmas headlining hometown show. The only downside was that, with Gaz having outgrown the Fleece and moving his “works Christmas party” to the bigger but sadly 14+ SWX, I couldn’t take my son and rabid Gaz fan Logan along… still, we’ll always have Salisbury (gig 1,166, barely 2 weeks ago)…!
Ady however was up for it – and old enough! – so, anticipating another early one (3 acts with a 10 pm curfew, yikes!) and mindful of Chrimbo shopping traffic around Cabot Circus, we left at 5.30, a swifter than feared entry into Brizzle pitching us up at SWX just before 6.30 doors. Nice! Grabbed a spot house left near the front as the place quickly filled, most folks aware of the early start. And quite so; a shade after 6.45, opener Jake Martin joined us to avail the crowd of a set of his raggedy-arsed, reactionary and joyfully profane sloganeering punk-folk. Wishing us a, “Merry Christmas you sexy sons of bitches!” he was the perfect opener for this evening, his half hour set being replete with beery sway-alongs and rousing singalong hooks, the crowd raising the roof with “For Fuck’s Sake Jake”’s rejoinder of “you’re an asshole!” A later number featured a la la la singalong, apparently an “up yours” to, “that lanky tattooed prick” Gaz, who’d been “talking smack” throughout the tour about Jake’s height and frequent woah-oh hooks. “We Sing The Words All Wrong” was another huge extended sing/swayalong, Jake leaving us with fulsome compliments and a huge burp (!) after a typically bolshy and ebullient set. Good start!


Met up with Matt and his lovely wife Liz at the back, before I popped back in, going house right this time to try to avoid a slew of big bald bearded blokes who’d stood directly in front of us for Jake (cheers guys…). B Sydes was next up, fully banded up albeit with a debut drummer (!), and kicked in with a devastatingly anthemic “Crutches”, the soaring best number from splendid new album “Self Sabotage”. A similarly hooky and heavy-rocking “Good Times” was next up, Ben pointedly referring to the disastrous election result with, “good times are coming – hard to believe after the last 48 hours…” This was a quite remarkably superb set, the material sounding tough and robust and really taking flight given the full band treatment, answering that burning question as to what dark and angst-ridden emo Goth folk would sound like…! “All At Sea” recalled the shuddering riff-heavy dynamics of Boston emo rockers Cave In, and “Verbatim” the yearning angst of Dashboard Confessional, Gaz sneaking onstage to play the final note (not as well as Logan did at Salisbury, though!). A buoyant Ben remarked, “touring with Gaz has been the best 2½ months of my life!” before set closer, the singalong “Desperate Dance”, rounded off a brilliant dark rock set, the only sour note being that I had to deal with a(nother) massive bald bearded bloke repeatedly backing into me towards the end! Still, one shout of, “mate, have some respect for those around you,” seemed to do the trick…


Thus irked, I headed back to Matt and Liz’ position, staying there for the first few numbers of Gaz’ set. On at 8.15 prompt and with none of this acoustic mucking about, he and the band were straight in with a groovy, catchy “Lostfolk” and excellently singalong “Gunner Haines”, before Gaz gave a big up for his tour banner again, leading into a quite deliciously harmonic “IOU”, with Chris Webb and co. giving the song extra layers with that Teenage Fanclub-esque harmony-laden chorus. Ady wandered down the front for a venomously-delivered “Black Dog Day”, and I joined him shortly after, this time pitching up next to a bloke who immediately apologised in advance for elbowing me during the set, as he was protecting his girlfriend, who’d cracked her ribs but still wanted to see the show. See, that I don’t mind at all…!


Given the full band treatment – sadly minus the mandolin of the otherwise engaged Nick Parker – the new material sounded as mellifluous and melodic as hoped, occasionally almost veering into amped-up US college/ powerpop territory (viz. a rampant “Snakes And Ladders”, my set highlight). However, a folkier number was never too far away, as Jake joined Gaz onstage (Gaz introducing him with, “earlier there was a tiny little man onstage…!” and adjusting Jake’s mic stand down a few feet, to the rejoinder of, “wanker cunt!” from Jake) for a fiddle-powered, raggedy-arsed and supersonic “Aged Revolt”. “Uneducated Guess” was a superb punkish rant, and “Land Pirate’s Life” even descended into samba rhythms from Chris and the band! Mindful of the strict curfew, perhaps, Gaz didn’t pause for the “encores”, powering through instead with roof-raising singalong renditions of “The West Country Song”, “Diabetes Blues” and closer “Great Minds Drink Alike”, Jake and Ben both joining Gaz onstage for a rousing finale. “This has been a mind-blowing evening!” Gaz remarked, thanking one and all at the end of a splendid 1½ hours.


The usual slow SWX egress and a quick blast home still got us back in the ‘don for 11 (!), after another great Gaz Brookfield evening. “The AGM of lovely people,” Gaz put it, and, with a couple of knuckle-headed exceptions, I’m inclined to agree. 25 down, and no doubt many more to come from Mr. Brookfield!
Posted by David Rose at 17:59