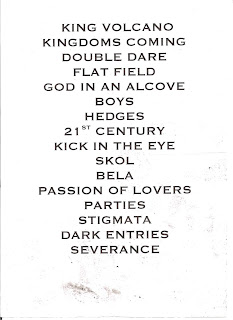 Another trip down memory lane, another “revival” show, another chance to revisit one of the acts of my fledgling early 80’s late teen formative musical years… a slightly different twist on the theme this time though; Peter Murphy, former frontman of 80’s dark, twisted art-school rockers turned Goth pioneers Bauhaus, chose to celebrate his former charges’ 35th Anniversary not by getting the old crowd back together, but instead by touring a full Bauhaus set with his own band! I missed out on the chance to see Bauhaus back in the day, as my musical tastes evolved away from the subsequent more black-clad, bat-infested Theatre of Goth, and also a few years back, when a Summer 2006 full Bauhaus reunion tour coincided with a holiday abroad. So I resolved to take the opportunity this time, also being joined by recent punk-oriented gig buddy Debs and old friend Doug McGuire, who’d been threatening to join me for a gig of late, and finally sorted one out!

I'd surmised this to be an early - and busy one, so I picked my gig companions up early doors for an entertaining drive down, parking up at 7.15. Wrong on both counts, though, as the place was deserted on arrival, a portent for the evening; the venue only ever got 2/3rd full at best, with the balcony shut all night. T'uh, no respect, these Bristolians... also, we faced an hour wait for the support, so hit the bar to chat. Support Eyes On Film, when they arrived, certainly looked the part; 5 leather jacketed young bucks and a hard-hitting female drummer playing some early-doors edgy punky stuff, remnisicent of a darker Marion. However, they degenerated into innocuous background noise and personality-free random riffery. A young band with much to learn about talking the talk before they walk the walk, methinks...

We took a good house left viewing spot before being regaled with a short film featuring clips from Peter Murphy's forthcoming album "Lions", some haunting and resonant stuff proving you can take the boy out of the batcave, but... However, we ere here for some doomy nostalgia, and following a final fiddly soundcheck we got it, as Murphy and his young band took the stage to little fanfare, easing through a couple of baroque, introspective openers embellished with some chillingly lovely mandolin, before taking flight with a strident "Double Dare", all seething and swooping drama.

Bauhaus ploughed a fiercely idiosyncratic furrow in the early 80's rock landscape, funnelling influences such as Bowie, Krautrock, post-punk and art school rock through a dark and slightly depraved worldview, strewn with sleazy sex and horror imagery and references. Like all pioneers, their music wasn't as extreme as that which followed in their wake, retaining style and melody instead of the comic Munsters goth of, say, Alien Sex Fiend. This was embodied tonight by Murphy's performance; imperiously striding the stage, adjusting the sound throughout (tweak this up, turn that down, a perfectionist in motion), and overlaying these classic songs with his rich, deep and sonorous vocals, adding suitable haunting gravitas to his lyrics. "In The Flat Field" and "God In An Alcove" were a superb early double salvo delivered by an impressive band, Murphy underlining this with, "these guys have been with me awhile; this isn't Bauhaus, this isn't trying to be a covers band - this is the shit!"

The classics kept rolling; "Passion Of Lovers", an extended, echoey and dubby "She's In Parties", a brilliantly jagged and ragged "Dark Entries", sadly shorn of the great inhalation of breath on record but magnificent nonetheless, songs I never thought I'd hear "live", songs as familiar as time and tonight delivered as celebratorily as they were dark. Another vaudeville routine punctuated encore "Hollow Hills", a by-now bare-chested but impressively rakish Murphy posing and preening, channelling Julie Andrews and Dick Van Dyke (!) before commenting, "it's odd that [this song] is a classic, [likewise] "Bela Lugosi's dead", David Jay wrote that, but I killed it; without my vocals, that song would be shit!" Actually, true, that. A raucous "telegram Sam" and a brilliantly singalong "Ziggy Stardust", underlying Murphy's debt to Bowie, concluded a brilliant evening. Murphy ended with thanks to his impressive band and sincere thanks to us, for joining this 35th Anniversary celebration. Me, I wouldn't have missed it, and it was a real surprise that so many did.

Elated, I grabbed a set-list and we headed off, having witnessed another resurrection almost on a par with Adam /ant's recent revival. Yup, that good. Mr. Murphy, Sir, you and your band tonight did full justice to the impressive legacy of Bauhaus. Well done. 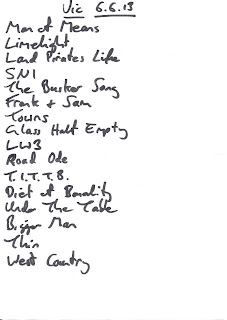 Rachel told me she’s having a contest over the course of this year; will I take her out more times than I go and see Gaz Brookfield? This being the third time I’ve seen The West Country’s finest potty-mouthed, have-guitar-will-travel, punk rock attitude acoustic troubadour in the year of 2013, this draws Gaz level with nights out with Rach; but as I’m taking her along tonight to see Gaz, does this count as No. 4 with her? As Captain Redbeard Rum once said, “opinion is divided, m’lud!”

Well, enough babble. Rach’s mum babysat and we headed off up the hill, hitting the obscenely deserted venue about 8.15. Dammit, Swindon, it’s Thursday night and early in the month; get out and support one of your own! Particularly when he’s as profusely talented as Mr. Brookfield is! Ran into Gaz in the bar early doors for a quick chat on this issue, to which he magnanimously remarked, “it’s quality that counts, not quantity!” Damn right, we’re here, after all!

Took a wander down to the back room venue to see opener Benji Clement. Accompanied by a low-key band this time, with bass and percussion to flesh out his sparse, bluesy-jazz sound, he again highlighted an eclectic selection of covers (a melange of “Moondance” and “Summertime”, some Hendrix, a challenging Al Green number and some Jungle Book!), an impressively smooth, occasionally scat-rap-improv vocal style and a positive attitude despite the tiny crowd. Nice work, young man. Back to the bar for a sit-down, but only briefly, as the between-act turnaround was impressively swift, allaying a tired Rachel’s concerns that this would be a late one. So Joshua Caole, a more unkempt, bearded young chap with the looks of an “LA Woman”-era Jim Morrison, a very American-sounding voice somewhere between Hobotalk and a nasal Michael Stipe, and an engagingly vacant line in between-song patter, entertained with some more Americana-tinged acoustic tomfoolery. I liked the idea of a murder suicide ballad set in the Forest Of Dean, and his stories of living in his car and needing to borrow cables from his mother-in-law (!) for this gig brought chuckles from the finally-growing crowd.

Again, the turnaround was quick, so Gaz took the stage a shade after 10, accompanied by his violinist partner-in-crime Ben Wain. This being only the second gig back for Gaz after a nasty bout of laryngitis which sidelined him awhile, he was allegedly taking it easy, but this certainly didn’t show with as committed and energetic a performance as ever, lapped up by this small but equally tuned-in and very knowledgeable hometown crowd. “Limelight”, second number in, was dismissed as, “a lie,” by Gaz, “as I’m on last, and also because this next number is about going on the road with my favourite band,” introducing the increasingly familiar Men They Couldn’t Hang-like travelogue of “Land Pirate’s Life”. The loud “arrrr”s at the end of “SN1” were met with an, “every time!” from an impressed Gaz, and I appreciated the way he tuned a lovely “Glass Half Empty” right back to a hushed whisper, to expose – and shut up! – a couple of noisy punters. Style.

“Towns”, a newie relating Gaz’ origins, revealed much of the man lyrically, with a passionate performance and the announcement that this might be the next album’s title track, underlining how important his heritage is to him. Live faves “Diet Of Banality” (which saw a breakdancing session from a punter, Gaz remarking, “that’s not going to be the dance routine!”) a rousing singalong “Under The Table” and an always brilliant “Be The Bigger Man” were a marvellous one-two-three punch, before another rousing singalong “West Country Song” rounded off another splendid evening. Taking it easy? Easing his way back? No way, tonight’s performance was as passionate, committed and thoroughly entertaining as ever, Gaz seamlessly returning to the stage like a true performer born.