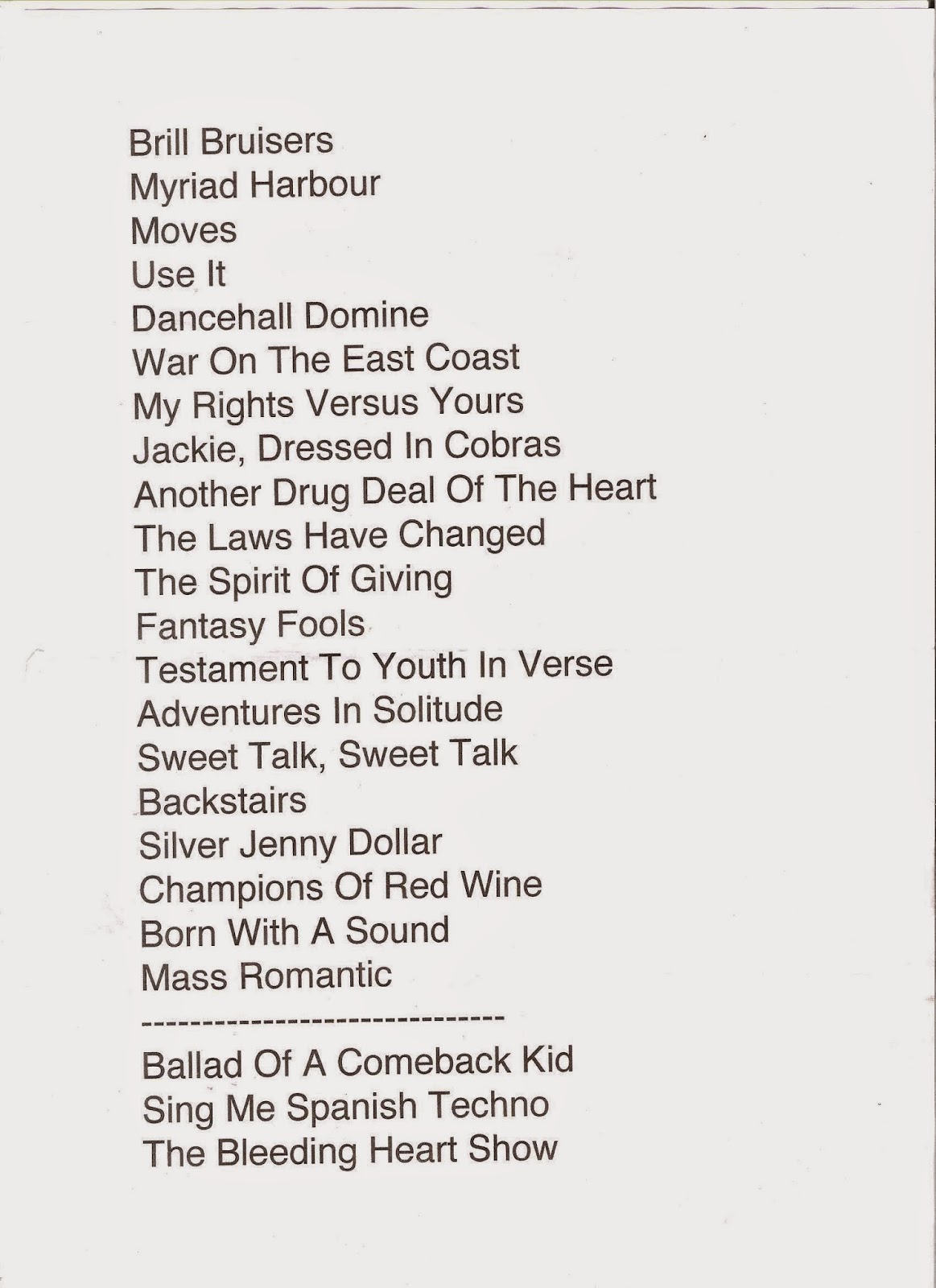 My final scheduled gig of a totally satisfactory 2014 is a welcome reunion with those prodigiously talented tunesmiths, The New Pornographers! Since my last sighting, in this very venue (gig 804, a week shy of 4 years ago exactly), I’d done the work I’d implied I needed to do on their back catalogue and found it utterly rewarding, their 3rd album “Twin Cinema” in particular becoming a regular in-car favourite of mine. Their current album “Brill Bruisers” is again a work of dazzling tunefulness, the only real departure being a hazy sprinkling of 80’s style keyboard and synth to embellish their usual wide and varied chameleonic musical approach and irresistibly brain hugging hooks, so I pounced on tix for this one straight away on the pre-sale. Also, after badgering Rachel for ages to listen to them, she finally crumbled, then realised I’d been speaking truths about their wondrous tuneage, so booked herself a ticket to join me! Yay!

So we headed off at 5, stopping for tea at Heston yet still parking up in our usual spot before 7.30, hitting the surprisingly quiet early-doors venue for openers Mini Mansions, on at 7.45. A California trio of bass, synth and a dapper, white suited Paul Simpson lookalike playing drums standing up, they played some 80’s-influenced synth pop with falsetto harmonies overlaid, making them sound very dated (The Bee Gees and Hall And Oates were two comparisons we made!). A dour, plodding cover of “Heart Of Glass” was almost funereal in feel, and not even a subsequent brighter, upbeat original number recalling Our Daughter’s Wedding could rescue them for me. At 45 minutes, they overstayed their welcome considerably, too…
We stayed stage centre, down the front, as the place filled up, Rach correctly tipping the band to come on at 9, rather than my website-provided 8.45 schedule. Sure enough, at 9 the 7-strong New Pornographers line-up sauntered onstage, led by strawberry-blond mainman Carl “AC” Newman and bearded, bohemian Dan Bejar, two-thirds of the band’s songwriting triumvirate, with Neko Case being oddly absent tonight. They kicked into the glam stomp and almost orchestral harmonies of opener “Brill Bruisers”, but the sound didn’t do them justice, sounding trebly, echoey and a little thin, almost as if the sound was exclusively coming out of the onstage monitors and bouncing off the stage backdrop. A few numbers in, it had improved to the point that you could actually hear Carl and Dan’s vocals, but remained sub-par throughout. A real shame, this, at this usually pindrop-perfect sounding venue.
I however have no doubt that when the New Pornographers sit down to write new material, they hang up “Quiet – Genius At Work!” signs. They all deftly walk a tightrope between producing mature, sophisticated – almost, whisper it, grown-up – songs in various chameleonic musical styles, which nonetheless all possess a vibrant, hooky immediacy which prevents them degenerating into clever-cleverness, instead really making them shine and sparkle. That said, they were hindered with the poor sound tonight, throughout, and then there was the intrigue of Dan… The unkempt, almost Columbo-like Bejar kept disappearing, only returning onstage to add his low, laconic and nuanced vocals to his own material before bowing low each time and taking off again, leaving his partner-in-crime to attempt to explain his absence (“where does he go? I can’t answer that! I think he [goes off and] reads Camus or something…”
All that said, they were still never less than excellent tonight, particularly energetic keyboardist Kathryn Calder, who filled in on the absent Case’s vocals and for me was possibly tonight’s MVP. Bejar’s wry vocals on “Myriad Harbour” recalled the NYC cool of Mink DeVille, the wobbleboard carousel ride of “Use It” and the darkly dramatic “War On The East Coast”, with its’ soaring chorus were an early double-whammy, and the jagged “Jackie, Dressed In Cobras” was a mid-set highlight. “Testament To Youth” featured a lovely acapella “bell ringing” middle 8 which was received reverentially by the quiet, studious crowd, and set closer “Mass Romantic” saw a mini mosh break out to its’ galloping, off-kilter joyride.
However, they saved the best until last; an utterly superb encore of “Spanish Techno” was topped by “The Bleeding Heart Show”, building from almost murder-ballad hush, through sinister flamenco, then to a galloping crescendo layered with harmonies. Brilliant, and a perfect punctuation point on a splendid set.
The home journey was a stinker, however, with Junction 2 of the M4 being shut, necessitating a painfully slow crawl through Brentford and a diversion around Heathrow, culminating in a home arrival at a red-eyed ¼ to 1. Yikes! Nonetheless, a thoroughly enjoyable evening despite a couple of bumps in the road, in good company both with my Rachey, and with The New Pornographers!
Posted by David Rose at 17:53 No comments: