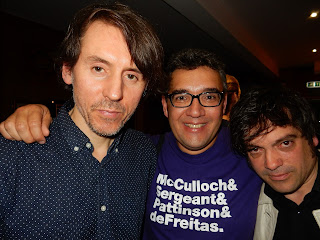 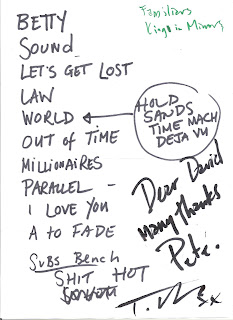 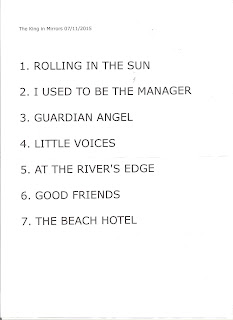 The first gig since The Pills, waaaay back in 2004 (gig 634) that I’ve had a small hand in organising! This one was over a year in the gestation; I’d picked up on the splendid 2014 album by this dream pairing of 90’s indie legends, namely Pete Fij, alias Piotr Fijalkowski, former vocalist and leading light of the excellent Adorable and Polak, and Terry Bickers, seminal guitarist with House Of Love and Levitation, subsequently “liking” their Facebook page to keep up with their events. So when they announced an embryonic Autumn 2014 tour and asked fans for further venue suggestions, I got in touch promptly about a Swindon date, mentioning the possibility to “Songs Of Praise” promoters Ed Dyer and Dave Franklin, who were keen on the notion from day one. Sadly we couldn’t make the dates work then, but a window of opportunity opened up earlier this year, when Pete contacted me to see if this November date would work as a “stopover” for them, as they were booked to play the Butlins “Shiiine On” 90’s revival weekender on the Sunday!

Originally booked for The Vic, this one was moved to the newer, more compact and (due to the “pub” location) free admission Locomotive venue down the bottom of town, following a clash of dates and a late case of cold feet by The Vic. So I drove down early doors to meet up with Dave, overseeing Pete and Terry’s soundcheck in front of a clutch of daytime drinkers outstaying their welcome. Ran into Rich Craven, who’d braved public transport from Oxford to get here (respect!) as the soundcheck concluded, then, as a happy part of my duties as “co-host”, I took the boys to Jack Spice for a curry and some entertaining music chat. An interesting dynamic between the duo – Pete, laid back, open and gregarious, and Terry more reserved and softly-spoken, but fine company both, an hour or so’s worth of rock’n’roll gossip flying by.

We paid up at 9 and I wandered back into the sparsely attended venue to catch up with Rich and Helen May, before Rich led his band The King In Mirrors onstage for 20 past 9. In keeping with tonight’s mood (and because of a schedule clash for their drummer!), Rich, Colin and Jase played as an acoustic trio, with the material actually benefitting from this treatment, giving it a hazy, lazy Summery vibe, exemplified by opener, the C86-tastic “Rolling in the Sun”. Despite Rich’s admitted and evident nerves at playing in front of exalted company, and the unfortunate chatter from the still-going daytime drunkards, the trio relaxed into their performance and delivered a fine support slot, with “Good Friends” (featuring Mr. Craven on co-vocals) and the slightly out of kilter, darker oldie “The Beach Hotel” personal highlights. Despite the nerves, nicely done indeed, Rich!

Familiars, up next, set up in short order, the only act tonight to employ a drummer and full band set-up. I’d personally invited them onto tonight’s bill, feeling that their delicious melancholia and upliftingly morose material would be a fine fit with the headliners, and thankfully my faith was totally justified. From note one, they played a blinder – vocalist and keyboardist Steve Skinley’s face-crackingly wide smile in evidence throughout, relishing this opportunity to play in front of Terry Bickers in particular, a self-confessed idol of his thanks to his turn in Levitation, and the band backing him up with a tight and superbly sounding set. “Half Life”, third number in, followed the usual Familiars modus operandi of being a piano-based slow-burn intro, which then built up a head of steam to a galloping crescendo and soaring “whoa-oh”s from Steve, a born performer and a really talented singer. Steve related an interesting story before one mid-set number, having played it in a slowly-deflating blow-up stage at the Stroud Fringe Festival earlier this year, only for the stage to re-inflate when the chorus came back in! I could see that, as Familiars music has that soaring, euphoric quality…! The circular keyboard refrain and National-esque dark drama of “Ballyhoo” was gorgeous, and only bettered by finale “Bottleneck”, introduced as “a silly song” but played with fun and relish, a couple of false crescendo endings building the gravitas. Familiars – you knocked it out of the park tonight, gents, and did me proud. Well done and thanks.

This took us somewhere approaching 11 and the witching hour, but by now a few of the local drunks had dispersed, leaving the place emptier than before. Despite promises of attendance from many and sundry, and plenty of promotion, it sadly looked as if Fij and Bickers were going to play to a frankly embarrassing turnout consisting primarily of the support bands, Rich Craven, Dave, Mr. “Paj” Jellings and myself. Shame on you, Swindon, shame on you.

Thankfully this didn’t put Pete and Terry off, as from note one of their show tonight they were amazing, their chemistry undeniable, their talent in full force and effect, delivering their mature, melancholy songs of love, loss and heartbreak with respect, reverence and simply glorious and blazing beauty. A telling acid test of the quality of a song is how it stands up to a stripped back rendition, and on that note Pete and Terry’s material holds up brilliantly, pared back to an almost naked hush, the boys understanding the emotive power and effect of silence. Their early cover of “I Fought The Law” attested to that point, the boys extracting the bombast of The Clash’s version and turning it into an achingly gorgeous and lilting ballad. Prior to that, the delicious Velvet Underground-alike “Betty Ford” opened proceedings and set the tone for their performance, and a new number “Let’s Get Lost” was playfully introduced by Pete as, “a love song – from me to Terry!” Then, “If The World Is All We Have” was identified by Pete as his attempt at both a James Bond them and a Eurovision entrant, and possessed a marked tango-esque French B-Movie feel to the verse.

At this point it seemed they’d won over the locals, the entire crowd paying attention to each note. Sadly, the chatter started up again towards the end of their set, and was a constant irritant for me. The duo soldiered on gamely, newie “Millionaires” being another autobiographical number (“the second album’s become a very self-obsessed affair!” quipped Pete) and “I Love You” a touching ballad with a sly undercurrent of menace (Pete relating its’ origin thus; “Terry said, “why don’t you cheer things up? Write a song called “I Love You” – what could possibly go wrong?””). However, after Pete introduced finale, the Adorable classic “A To Fade In” by thanking myself and Dave F for putting on tonight’s show, I was moved to try to quell the chatter with a loud “shhhhh!” then a “for fuck’s sake, SHUT UP!” to the disrespectful amongst the crowd. Nevertheless, “A To Fade In” was my undoubted highlight of the night, a massively heart-cracking elegy, wallowing in glorious sadness and bittersweet regret. More so when Pete, perhaps recalling our curry-house conversation earlier (wherein I’d asserted that Adorable should have had the career trajectory of the completely inferior Oasis, in which case “A…” would have been their “Wonderwall”), caught my eye as we echoed the “baba ba ba” denouement back to each other. A genuinely moving moment.

A swift (and for me unnecessary) encore later, and it was onto photos, post-gig chat and compliments, apologies for the paucity of the crowd (though it mattered not to the boys, true pros both) and signed stuff aplenty (particularly from Mr. Skinley, who’d brought a stack of Levitation vinyl for Terry to scrawl over!). Like Friday, I really didn’t want this night to end, but, realising it was bumping up to 1 a.m., I reluctantly headed off. A little conflicted at the time (pissed off about the attendance and background noise), I’m now realising this was a triumphant evening, a brilliant performance from 2 genuine Indie icons who, 20 years removed from their alleged “heydays”, are still making music from the absolute top drawer. Overall, it was an honour and a privilege to have been associated with tonight!
Posted by David Rose at 20:30