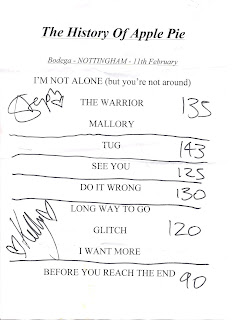 Not the best way to prepare for a return to work after a lovely week off looking after the kids at half term, but an enjoyable one nevertheless; a gig on the “Dirty Boat”! Tonight’s hosts: The History Of Apple Pie, whom I’d seen about 18 months ago in Cardiff supporting Male Bonding, being diverted by them in a shoegaze/ Lush kind of way but unmoved by the paucity of immediate tunes, and promptly forgetting about them… That is, until a chance meeting with Beef prompted me to check them out again on YouTube, this time thoroughly enjoying both the spiky guitar textures, but also the hooks! Thus re-enthused, I opted to join Beef on this trip to the Thekla. Any excuse, I know!

Mindful of previous early gigs at the Thekla, Beef picked me up at ¼ to 7 for a roadworks-affected run down to Brizzle, getting there an hour later, and puzzled by the lack of activity around the venue. Realised when we got in that not only was this a later gig, but was also on the much smaller yet thankfully covered top deck of the boat, rather than down in the belly of the vessel. Subsequently, we were the 6th and 7th punters to arrive! This however meant enduring a couple of risible support “acts”; Follow The Sun, up first, was a solo guitarist/ keyboardist playing dour instrumentals and following the current “trend” of playing a riff then programming it into his PC or effects pedal loop, rather than playing the damn thing “live”. Sounding like music for low budget nature documentaries (i.e. the ones who can’t afford a Sigur Ros soundtrack), this was interminably dull; sorry, for “hypnotic”, read “repetitive and boring as all shite”. Duck House, next up, were just as bad; a duo playing really bad 80’s wine bar funk/ synth pop, recalling the likes of Shakatak (seriously!) and reminding me of some unfortunate 80’s nights at former Swindon nightclub Bubbles (!). Again, another band smothering their sound with pre-programmed tracks and effects, their “performance” effectively consisted of punching keys on their PC. I do that all day at work and I don’t expect anyone to clap. Guys, play your flippin’ songs “live”, or you might as well not be there onstage!

Thankfully, we had an actual band to rescue us from tape loop hell. We popped down to the front of the small corner stage for The History Of Apple Pie’s arrival at 9.45. A young 5-piece, featuring a 2-girl vocal attack, they were quite crowded on this tiny stage (a point main vocalist Steph made after their first number, to which a punter shouted that the ubiquitous Big Jeff should move back and give them room!). They nevertheless eased in with a couple of low-key, atmospheric openers, before unleashing “Mallory”, their finest number, 3rd track in. An upbeat, soaring delight with an off-kilter, repeating riff and some lovely intertwining harmonies, this delicious number was my set highlight, although it was almost matched by a similarly upbeat “Tug”, next up, before the band moved down the gears for a sprawling, slower-burn and more widescreen “See You”. Musically, they’re still in thrall to the late 80’s/ early 90’s sonic template of shimmering wall of sound guitars and shoegazey submerged vocals, with the likes of Lush and Pale Saints obvious reference points, but the discordant and dramatic “Do It Wrong” also recalled Madder Rose, and there’s now quite a sly and surreptitious level of tuneage here, creeping up on you and burrowing into your consciousness.

A spiky, angular “Before You Reach The End”, their lengthy album closer, fittingly brought a short but sweet 40 minute set to a close, before I grabbed a set-list, got the girls to scribble their Jane Does on it, and we hastily hit the road. Work tomorrow, you see, but this was definitely a fine way to spend my last “holiday” evening!
Posted by David Rose at 17:20