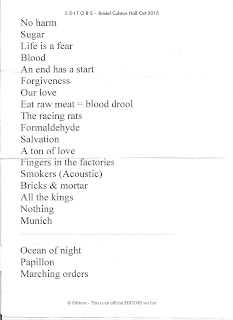 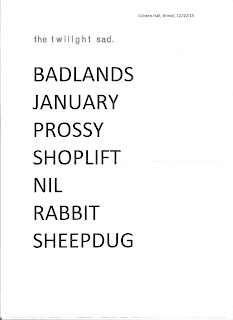 After a traumatic week personally, I was very grateful for the high pace of my Autumn dance card, and glad to get back to gigging ways; so could ask for no better hosts than Editors, likely the UK’s finest exponents of this many splendored thing we call rock. Barely a 2 year gap has elapsed since their last album and subsequent Reading Fest 2013 appearance and triumphant O2 Academy showing later that Autumn, but they’re back, with a new album “In Dream” hitting the racks last week, on cursory first listen harking back to the more experimental dark and claustrophobic electronics of “In This Light And On This Evening”. Possibly a bleak one in prospect, reflecting my overall current mood, but no bad thing…

I was joined for this by Facebook friend and fellow gig-counter Stuart, 10 years my senior but with an equally undimmed passion for rock, and his teen son Rory, who happily appears to have inherited his old man’s thirst for “live” music. The drive down to Bristol therefore fairly whipped by in a whirl of rock chat, and we parked up in Trenchard fairly unhindered, despite a serious blaze having occurred nearby during the day. Took a seat at the front of the stalls (to rest my knee, which had been playing up for a few days, and Stuart’s foot, injured by a box at home – poor old buggers!) for openers, Kilsyth reprobates The Twilight Sad, who operated in similar dark and gloomy sonic territory to tonight’s headliners, albeit with a smoother keyboard sound augmenting their own claustrophobic mood. Third number, “Prossy” was a tantalising rockist wall of sound, whilst other numbers were shoegazy, bleak and funereal, with yearning vocals from the heavily Scottish accented James Graham, who, as part of his passionate performance also abandoned the mic, Craig Finn like, to proclaim directly to the crowd. Messy in parts, absorbing in others, this was an entirely apposite support, impressing me enough to pick their CD up afterwards.
Ran into old Brunel face Stefan Milsom (probably for the first time since the last Editors Colson Hall show!) before I took a wander down the front, pitching up 3 rows back stage right for a superb viewing – and dancing! – spot. Editors took the stage bang on 9 to no intro, the eerie spotlight and moody, sparkling synth embellishing opener “No Harm”, vocalist Tom Smith switching between his usual sonorous, rich and resonant baritone, and an eerie, soaring falsetto. The mid-tempo “Sugar”, next up, continued the elegiac, melancholic mood, with Smith already dramatically enacting every note, whilst the band carefully and deliberately eased themselves into this, only the 3rd set of this tour.
This was a varied set, highlighting the slower, moodier material on the new album whilst breaking the pace up with a sprinkling of older numbers, but at times initially felt as though it was dragging somewhat. So whilst an early double of the jerky, jagged and upbeat “Blood” and the excellent “End Has A Start” got me rocking out, the set then drifted until a brilliant, soaring “Racing Rats” dragged it back from the brink. As if to also illustrate the inconsistency of the set, newie “Salvation” was disappointingly muddied and dirge-like, but the subsequent “A Ton Of Love” was massive, triumphant and celebratory, with Smith’s vocals filling this ornate old theatre, and “Fingers In The Factories” might just have been the best number in the set, the tight staccato rhythm and riffery leading to a strident, fist-pumping chorus, breathless and brilliant.
“That was quite some fire tonight! I was going to play “Smokers” but my dad texted me to play “All Sparks” [instead] as nobody died!” announced Smith, bolting on a fat acoustic and ending up playing both anyway, “Smokers” in particular benefitting from this stripped-back arrangement, soaked with unexpected sadness and melancholy. A radically reworked “Nothing” was flag-waving and anthemic, a quantum improvement from the string arrangement on the last CD, and the Interpol-lite slashing monotone guitar riff of “Munich” ended an occasionally frustratingly inconsistent but ultimately worthwhile set.
The encore highlight of “Papillon” saw Smith, angular and pliable throughout, challenge the hitherto-static Bristol crowd with, “Bristol; are you there?” and throw kinetic shapes to the robotic synth beat, while colleague Russell Leetch (whom I’m convinced caught my eye and gave me an approving nod for throwing my own shapes earlier in the set) indulged in some low-slung New Order/ Hooky bass shenanigans, leading the song to a lengthy and cacophonous conclusion. I then grabbed a list and (eventually) a tatty and used drumstick for Rory, then met up for a similarly swift and chatty drive home, reflecting on the show. As I said, a little frustrating in parts, due to the unfamiliarity and initially dour nature of the new stuff; a lot of new material for such an early set on the tour, and no introductions throughout as well – Editors, you contrary bunch! Nonetheless, this was another overall entertaining and much-needed gig in the company of Editors, the band who, for me, still head the field for UK bands!
Posted by David Rose at 20:00