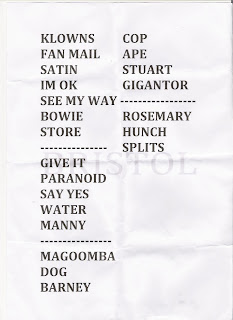 No better way to start 2 weeks off work than with a gig, particularly when the hosts are original 70’s California cartoon punk rockers The Dickies, originators of the “punk rock cover version” with their gleeful 100mph destructions of the likes of “Nights In White Satin”, “Paranoid”, and their best-known moment, the “Banana Splits” kid’s TV theme song! A band to whom Green Day, for inastance, own a sure debt of gratitude, and a band who’ve delivered a couple of manic but magical gigs in the past, but have been off my gig radar for about 12 years!

So after a late call, I took a Friday night jaunt to the Fleece, hitting this venerable old venue early doors and enjoying some vintage Antmusic before first band, 2 Sick Monkeys, at 8.45. A Swindon (!) two-piece of indeterminate vintage, they blasted through a set of late Dead Kennedys style hardcore onslaught with an admirable enthusiasm of a band twice their number and half their age. The badger-haired gobshite bassist/ vocalist was as funny as fuck (introducing a song called “Happy Days” with, “this is about my suicide note, that was so crap I couldn’t die!”), their prog rock pastiche (“Spontaneous Aboebic Dysentry”!) was ironic and well-observed, and props for ending their set with a song called “Fuck Off”. Hard on the ears early doors, but a riot overall; more power to them! Mike TV, next up, were led by a straw haired Jonathan Papelbon look-alike, and played a more melodic punky noise owing an obvious debt to Mega City Four, with some nice nasal 3 part harmonies a la Silver Sun. Clumsy and off key in parts, but another band with a quick wit (responding to a fat heckler with, “he got me! I’d get him back but I’d have to climb the cunt first”), and one memorable number, set closer “Push Comes To Shove”.

The Dickies came on to an expectant crowd of old punk rockers at 10.30. Now down to 2 original members, vocalist Leonard Graves Phillips (who with his lanky frame and hastily discarded specs, initially resembled a punk rock Arsene Wenger!) and guitarist Stan Lee (a chunky, curly haired monolith with forearms like hams), and backed up by 3 proficient rent-a-punks, their opener “Killer Klowns” unfortunately sounded overloud and technically beset. However, “Fan Mail” kicked it up a few dozen speeds, and the subsequent “Nights” really got the mosh going and the gig into top gear. Phillips, energetic throughout (“not bad for 60”, he commented early on, to a huge cheer), introduced “Give It Back” with, “this song is old”, to which the mosh replied “HOW OLD?????” “Paranoid” followed, as mental, amphetamine-fast and furiously riffing as ever, Stan throwing heroic rock poses, then Phillips donned mask and snorkel and brought on a blow-up doll for a magnificent, set highlight “Waterslide”.

This precipitated a procession of props; a dog hand puppet for “Doggie Do”, a quickly-discarded gorilla mask for “You Drive Me Ape”, and the brilliant penis arm puppet, replete with pendulous bollocks, for the excellent “If Stuart Could Talk”. Then set closer “Gigantor” saw Phillips zoom around the stage with an impromptu towel cape, like the space age robot of the song’s subject.

The inevitable “Banana Splits” ended the planned encore, after which we got an unplanned “(I’m Stuck In A Pagoda With) Tricia Toyota” (which had been my earworm all day leading up to the gig!) and an almost straight “Rocking In The Free World” to end a frantic, frenetic 1¼ hours of vintage cartoon punk tomfoolery. “You’re a great looking bunch of kids, I’d like to have sex with each and every one of you!” declared Phillips, and the admiration was mutual. Another band growing old disgracefully, and another superb retro gig for 2011, thanks to The Dickies!