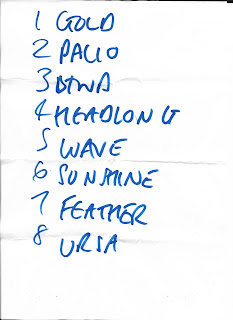 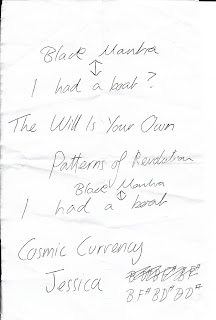 An utterly fascinating evening of challenging music and entertaining rock discourse with talented folk began with a very late call. Unsure about my ability to stay awake late after The Horrors gig last night, I nonetheless went for it, lured by the prospect of an eclectic 3-act bill at my old “spiritual home”, Swindon’s very own Level 3, topped by Hail, the remaining pairing of Liam and Sophie from the very promising Polar Front, who impressed up the Vic last September (gig 1,003) with a genre-straddling indie/pop collision of a set. Early days for the new line-up, sure, but worth checking out anyway...

Parked round the corner just after 8 only to find the venue shut, with door due at 8.15! Popped into the neighbouring Rolleston instead,  to find tonight’s promoter Dave Franklin engaged in earnest discussion with my recent Facebook friend Geoffrey Head! One of only 2 gents whom I'd happily defer to as having a greater passion and appetite for "live" music than my own (the other,  ironically, also being called Jeff!), it was great to finally meet "The Head Of Music " in person, and we compared notes and gig experiences over Grolsch and Lemon & Lime in both the Rolly and Lev, once it opened.

Quickly, the time ticked to 9 pm,  and Luke DeSciscio plugged in onstage and prepared to play to a sadly sparse but knowledgeable audience.  Once again conjuring a hushed and intricately melodic atmosphere from the outset, his dexterous acoustic guitar work formed a base for his impressive, octave-straddling voice to swoop and soar.  "I'm still getting used to playing sober," he remarked, and another feature of this set was how thoughtfully and cerebrally he approached his performance throughout, as if considering how to meet his own standards. The pastoral and baroque atmospherics again recalled 60’s icons Love, but the voice, quavery and chillingly beautiful, was Buckley-esque in its emotive range (yup, I know "Buckley-esque" is a bit of a cliche phrase, but hey, if you hear clip clops down the street, you think "horse", not "zebra", right?). I loved the lyric, "I'm getting a tattoo to forget you" in the stark, bare "Patterns Of Revolution"; his refusal to play the between-song banter game  ("don't expect any communication from me while I tune"... nice one!); and final number "Jessica", the conversational lyricism depicting a breakup in brutal, mundane detail. I’m becoming more of a fan of this talented young man each time I see him!

Had a, "holy shit!" moment at the bar afterwards, as former XTC guitarist Dave Gregory was in attendance! Mr. Franklin kindly introduced us and we briefly chatted XTC and Boston rock, before London band Fassine eased into their set. The reason for Mr. Gregory's attendance tonight (Fassine having featured on the recent excellent Sky Arts documentary "This Is Pop"), advance reports had led me to expect an eerie, ethereal 4AD trip-hop groove soundscape from Fassine. None of that, though, as the 5-piece, led by the strikingly attractive brunette Sarah Palmer, initially recalled the moody, loose-limbed melancholy of latter-day Madder Rose, thereafter weaving a more complex musical pattern of dark, dramatic late night torch music and keyboard crescendos (once the mix allowed for it), overlaid by Sarah's soulful and, at times, almost operatic vocals. No obvious comparisons here (I noticed bits of the classy indie heartbreak of The Heart Throbs, and the layered, textural approach of Grizzly Bear, but really, I'm reaching here...), just a fine, accomplished band displaying those old-fashioned virtues of splendid musicianship and intelligently crafted songs. Plenty to say too, the gregarious Sarah remarking, "we wanted to see the White Horse and the Ken White murals, but went to a Weatherspoons instead!", then waxing eloquently about XTC prior to their splendidly observed cover of "Nonsuch"'s "That Wave". The subsequent "Sunshine" was my favourite, an eerie keyboard refrain underpinning a building groove which soared to a crescendo. Ultimately, of Fassine, I can simply say, This Was Pop! Classy and clever, but pop all the same. Nice one!

A couple of engrossing chats with Luke DeSciscio and, outside, Fassine, saw me miss both Dave Gregory and Geoffrey's departures, and the first couple of numbers of Hail's set. Yipe! Wandered back in to find the duo already kicking up a storm, with Sophie's rousing, strident tones and impressive vocal range and Liam's hard-hitting drum style being augmented by some looped electronica colour wash (normally my bugbear, but hey, I can forgive them!). Sometimes a little too hard-hitting from Liam - as if attempting to compensate for the reduced numerical line-up by bashing the shit out of his drums, and occasionally suffering from "bass drum wander" as a consequence! - they were nonetheless determined that their melting pot of rock dynamics, ethereal textures and modern-day pop/ dance sensibilities be delivered stridently and powerfully. "Criminal" was my set highlight, a tumbling drum pattern underpinning a stripped verse which built to a more layered strident chorus, and the subsequent "Nothing" featured a looped grime rap, the result of a collaboration with a local grime artist. Overall a fine if embryonic set - clearly a work-in-progress, the key building blocks of talent and application are there for Hail, so their journey to the finished product should be fairly swift!

More rock chat with Liam and Fassine afterwards, before I cried, "enough!" and headed wearily home. Glad I made it to this one, though; all Hail to a Fassine-ating evening!